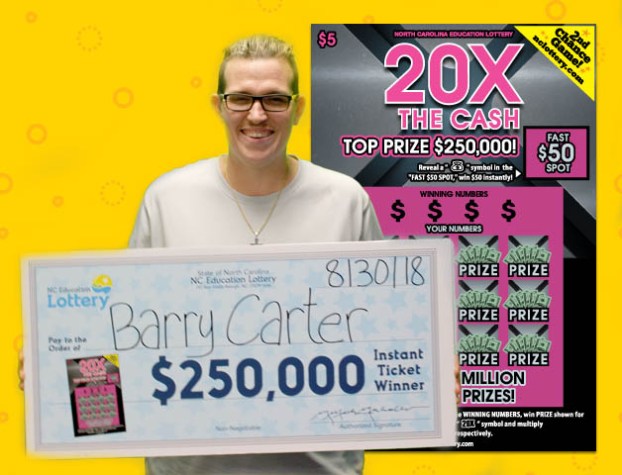 Barry Carter is all smiles after winning big on a lottery ticket.

Barry Carter of Oakboro said he plans to fulfill his dream of being a homeowner after he won a $250,000 lottery prize.

“It feels like a dream,” Carter said. “I just proposed to my fiancé, so we’ll get a one- or two-bedroom house. Just something simple.”

The car wash attendant’s good fortune happened Wednesday night when he stopped by Variety Pickup on North Main Street in Oakboro and bought some 20X The Cash tickets.

“I almost didn’t buy them,” Carter said. “There were only four left on the roll, so I decided to get all of them.”

Carter took the tickets home and scratched them while he heated up some vegetable beef soup for dinner.

He was still in disbelief when he woke up Thursday morning.

“The first thing I did was check the ticket,” Carter said. “I don’t know when it’s going to set in.”

He claimed the prize at lottery headquarters in Raleigh. After required state and federal tax withholdings, he took home $176,254.