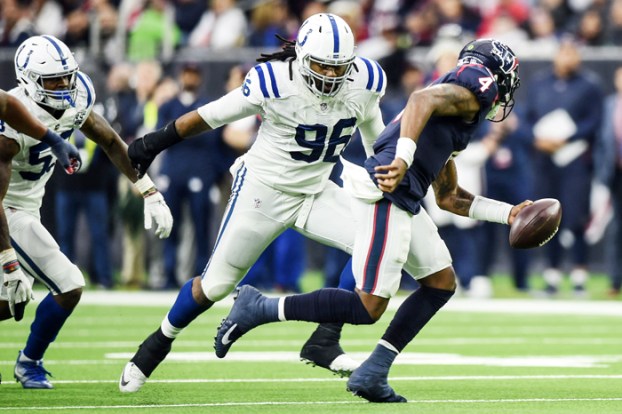 Denico Autry’s second straight standout performance has earned him some recognition from the league.

The National Football League announced that Autry has been named the AFC Defensive Player of the Week for his standout performance last Sunday in the team’s Week 14 victory over the Houston Texans.

Autry’s defensive dominance both against the run and the pass was a major reason why the Colts were able to fly home last Sunday with a 24-21 victory over the Texans, snapping Houston’s nine-game win streak in the process.

In all, Autry had four tackles (three solo) with 2.0 sacks, 2.0 tackles for loss and two quarterback hurries.

Autry’s first sack was huge for the Colts, as it came on third down midway through the second quarter, forcing a Houston punt. On the ensuing Indianapolis drive, quarterback Andrew Luck would find wide receiver T.Y. Hilton for a 60-yard completion on the very first play, and running back Marlon Mack would run it into the end zone from four yards out from there to tie the game at 7.

But Autry wasn’t done in that quarter.

After the Colts went ahead, 14-7, with a 14-yard touchdown pass from Luck to tight end Eric Ebron, Autry brought down Texans quarterback Deshaun Watson once again on the ensuing Houston drive, this time on first down. The Texans would be forced to punt again three plays later, and the Colts would respond with a 54-yard field goal by Adam Vinatieri to go into halftime with a 17-7 lead.

Autry was actually an AFC Defensive Player of the Week candidate for a second straight week. He had seven tackles (six solo) with a career-best 3.0 sacks, four quarterback hurries, 3.0 tackles for loss and two forced fumbles two weeks ago in the Colts’ 6-0 loss to the Jacksonville Jaguars at TIAA Bank Field.

Factoring in Autry’s performances against the Jaguars and the Texans, he became the first Colt since Mathis in 2013 to register 2.0 sacks or more in two straight games. In the month of December, Autry leads the NFL in sacks (5.0) and tackles for loss (5.0), while tying for the league lead in forced fumbles (two).

Despite missing four games with injuries this season, Autry has collected 33 total tackles (11 tackles for loss) with a team-best 8.0 sacks, 10 quarterback hits, two forced fumbles and one fumble recovery on the season.

He’s been as-advertised after signing with the Colts this past offseason as a talented, versatile piece up front.

“Chris (Ballard) and obviously his staff did a great job of really identifying him as a quality free agent (and) the kind of person and player that we want in the locker room – the kind of leader,” Colts head coach Frank Reich said of Autry. “Then as a player, just fitting into our system of getting up the field, penetrating, having some versatility where he can play inside, but you can also put him outside if you had to. Then the other trait that you really need to see is somebody who has a motor. I mean, because that’s a big part of what we do and Denico has shown all those things.”