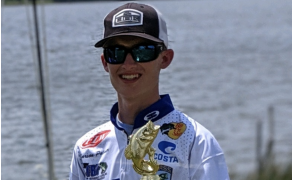 North Stanly junior Carson Palmer was one of 12 high school anglers in the country to be named to the Bassmaster High School All-American Fishing Team. (Contributed)

Bassmaster issued a press release announcing the 12 selections for the nationwide team.

A junior, Palmer has amassed seven tournament wins over the past year. In addition to those wins, he has also earned four Top 5 finishes, as well as two Top 20 finishes. Because of his tournament success, Palmer has been ranked in the Top 10 college recruits on Top Tier Fishing.

“I was pretty much in shock,” Palmer said when he heard about the award, considering the large number of applicants from across the country.

Competing in about 20 tournaments a year, Palmer has an offer to fish at the collegiate level from Carson-Newman University. He said he also has aspirations to fish professionally on the Bassmaster Elite tour.

According to the release, Palmer serves as the vice president of his junior class. He also is involved in the community by collecting items from other students and community members and taking them to cancer patients during their treatment period.

“I believe Carson Palmer to be a student of high moral character and great work ethic,” said Anne Mauldin, an English teacher and Student Council advisor at North Stanly. “He has proven himself in and out of the classroom to be an asset to his peers and his teachers. He is eager to learn and his charismatic personality makes him a joy to be around.”

“The Bassmaster High School All-American program continues to be the most prestigious in the country,” said Bruce Akin, B.A.S.S. CEO, in the release. “Congratulations to the 12 All-Americans for this high achievement in recognition of not only your fishing skills, but also your scholastic, conservation and community service achievements.”

More than 300 applications nominating students in grades 10-12 were submitted from 33 states. Of these, 49 were chosen as Bassmaster All-State anglers. After reviewing tournament resumes, conservation efforts, community service activities and recommendations from coaches and school officials, a panel of judges representing the sportfishing industry, media and conservation groups narrowed the field to the Top 12 high school anglers in the country.

“Congratulations to these 12 young anglers who can now call themselves Bassmaster High School All-Americans,” said Hank Weldon, senior manager of the B.A.S.S. High School program. “This program is unlike any other in all of high school fishing and each angler and parent should be very proud of this accomplishment. I look forward to celebrating their achievement at an upcoming Elite Series event.”

The team has been invited to participate in a special Bassmaster High School All-American Bass Tournament, which will be held in conjunction with an upcoming Bassmaster Elite Series event. Each All-American angler will be paired with an Elite Series pro for the one-day derby to be held on a nearby fishery.