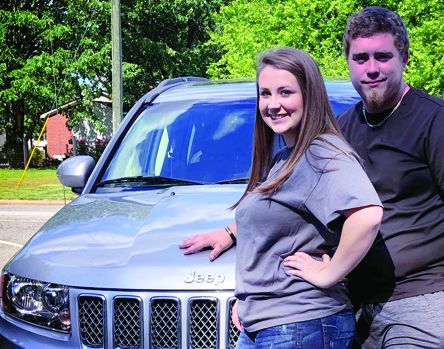 Allan Zepp, a maintenance worker in Gaston County, said after he won a $100,000 prize on a scratch-off ticket he decided to surprise his wife with a new car for her birthday.

Zepp said a friend helped with the surprise, bringing the car over to detail it. He said he then asked his wife to check out the car, a 2016 Jeep Compass.

“’Go make sure that’s what you want,’” Zepp said he told his wife. “When she turned around to tell me yes, I handed her the keys. Her face dropped.”

The birthday surprise occurred after Zepp tried his luck with a $25 Extreme Cash ticket purchased at Will’s Food Stores on Hickory Grove Road in Gastonia and won the game’s top prize. He said he picked the ticket because it was new.

Extreme Cash launched in March as the first scratch-off game where the lowest prize available is more than the price of the ticket.

After federal and state tax withholdings, Zepp took home $70,757. He said the win gives him “a fresh start.” Besides the new car, he says he also plans to pay down his mortgage and get some presents for his kids.

Ticket sales from scratch-off games make it possible for the lottery to raise more than $700 million per year for education. For details on how $13.5 million raised by the lottery made a difference in Gaston County last year, visit www.nclottery.com and click on the “Impact” section.