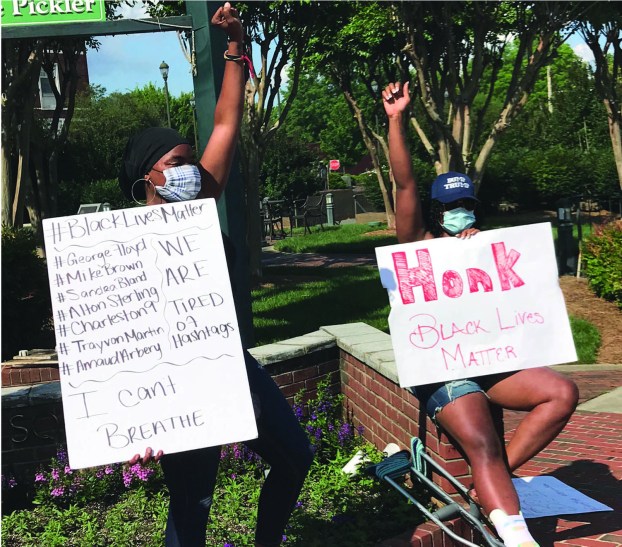 As protests have erupted across the country over police brutality, specifically the death of George Floyd at the hands of the Minneapolis Police, individuals in downtown Albemarle peacefully assembled over the weekend to add their voices to the chorus of people upset at what occurred.

Albemarle resident Joanne Carpenter carried signs reading “Honk for Black Lives Matter” and “I Can’t Breathe,” which were Floyd’s last words. She was one of a diverse crowd of about 10 people who came out for the protest.

“All we are asking for is a change,” she said. “We’re just asking for equality and asking to be treated the same. That’s all we’re asking for.”

Carpenter, 24, said she was angry when she first heard about Floyd’s death.

“My thoughts were how many times are they going to constantly keep doing it before something is done about situations like this,” she said.

Floyd, a 46-year-old black man, died May 25 in custody after Derek Chauvin, a white police officer, kneeled on his neck for more than eight minutes while three other officers helped. All the officers were quickly fired and Chauvin has been arrested and charged with third-degree murder and manslaughter.

Floyd’s death, which was recorded and spread across social media, is not unusual. Many black men and women have died at the hands of police over the past decade, including Breonna Taylor, a 26-year-old black woman shot by Louisville police in March.

The death of Floyd became an instant national touchstone, sparking protests in more than 100 cities, including Charlotte, Raleigh and Salisbury. Although many of the protests have featured violent clashes with the police, as well as the destruction of private property and looting, with several people — protestors and police — injured and a few killed, the ones in North Carolina have been relatively peaceful, though tear gas was deployed and people were arrested.

The protesters began at noon Saturday at the Stanly County Courthouse and worked their way to the four-way stoplight at the corner of East Main and Second streets. All of the people were wearing masks and were properly socially distancing. The Albemarle Police Department sent the crowd pizza while the Albemarle Fire Department supplied water.

Albemarle Police Chief David Dulin said his department “supported our local community last Saturday by providing cold bottles of water and pizza to the folks exercising their right to a peaceful protest.” The department also held positive discussions with the protestors regarding how people can better work together, according to a Monday Facebook post from the city of Albemarle.

Carpenter rallied alongside friend Chyna Ridenhour, also from Albemarle, who is the mother of a 5-year-old son and 3-year-old daughter. She also had several signs including “I’m a mother of a black son, his life matters” and “I’m a black woman with dreadlocks. Do you feel threatened?”

She said she attended the protest to highlight not just Floyd’s death but the many others who have died at the hand of police departments across the country. Ridenhour carried another sign that listed names of other black people who have died at the hands of the police including Michael Brown, who was killed in 2014 in Ferguson, Mo., Sandra Bland, who was found dead in a Texas jail cell in 2015 after being arrested for a routine traffic stop, and Alton Sterling, who was killed in 2016 in Louisiana.

Carpenter and Ridenhour said they protested for about six hours. Though a few people hurled obscenities at them, the majority of people were positive, with many cars honking in a show of support and solidarity. Many people came up to them and thanked them for the the messages they were promoting.

Ridenhour, 26, emphasized that the protest, and its message, was not aimed against police officers.

“Black people are not anti-cop, we are anti-bad cop, whether it be a black cop or a white cop,” she said.

She still gets emotional thinking about the video of Floyd’s death.

“He kept screaming ‘I can’t breathe. I can’t breath,’ ” she said. “Within those five minutes, they (police) could have saved that man’s life and they could have avoided all this rioting that’s going on in the world right now.”

Ridenhour and Carpenter said they plan to participate in more peaceful protests this week.

“I commend and applaud the individuals that organized and participated in the protest this past Saturday,” said Albemarle Councilman Dexter Townsend, a prominent African-American elected official in the county. He said he didn’t attend the protest simply because he didn’t know about it.

“I’m an advocate for any non-violent people protesting, especially with the issues that our country is facing right now with racism, police brutality, murders and things of that nature,” he added.

Law enforcement in Stanly County have condemned the actions of the police officers in Minneapolis.

“We do not condone that officer’s actions and we hold all of our deputies to a higher standard and we treat everybody with the utmost respect,” said Stanly County Sheriff Jeff Crisco.

He added: “As long as people protest peacefully and no property is being damaged or lives are put in danger, we are all for it.”

“The death of anyone is tragic,” said Dulin in an email to the SNAP, “but the death of an unarmed citizen at the hands of a law enforcement officer erodes the trust we work so hard to gain from the community and it does not align with our duty to protect and serve.”

While he doesn’t condone violent protests, Dulin added that APD “recognizes the interdependent relationship with the community we serve and will remain sensitive to the community’s priorities and needs.”

In a statement posted on Facebook, Stanfield Police Chief Corie Faggart wrote that what happened to Floyd was a “terrible tragedy.” “This incident has angered everyone all over the country and rightfully so,” he wrote. “There is no doubt that the majority of police officers in this country are angered and disturbed over this incident as well.”

U.S. Rep. Richard Hudson (NC-08) took to Twitter to offer his thoughts about George Floyd, who was born in Fayetteville. He wrote that he was “sickened watching the video” and “saddened to learn his horrific killing is being mourned by members of his family in our community.”

Oakboro native B.J. Hill, a former West Stanly football player and current New York Giant, posted a message on Facebook calling for more empathy and understanding. “Before saying something crazy or ignorant think about others,” he wrote. “Put yourselves in in their shoes. Imagining if that was was your son getting treated like that, begging for life saying ‘I can’t breathe’ over and over.”

He added: “You might not feel like I feel about the whole situation but I challenge you to go and talk to someone who isn’t the same color as you or looks like you and ask them how they feel and have a conversation and listen!”