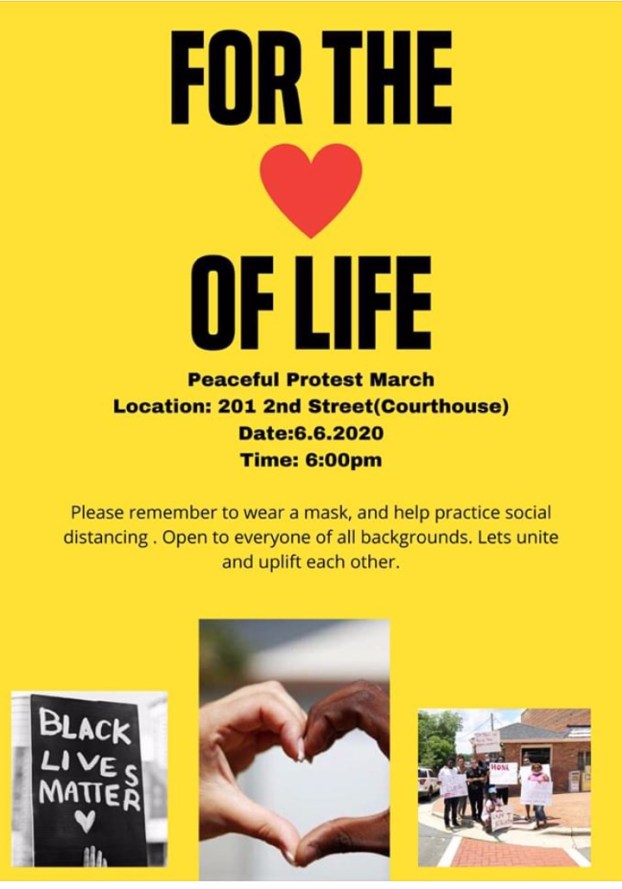 There will be a protest to honor George Floyd this Saturday at 6 p.m. at the courthouse in downtown Albemarle. Photo courtesy of Malaysia Smith.

Another peaceful protest is planned for 6 p.m. Saturday at the Stanly County Courthouse in downtown Albemarle. The protest is for people wanting to unite in solidarity over the death of George Floyd, who was killed while in police custody in Minnesota last week.

Malaysia Smith, who organized the city’s first protest last Saturday, said a lot of people who wanted to participate simply didn’t know about it and so she and a few others decided to organize another one.

Smith emphasized that the protest, which is called “For the Love of Life,” will be peaceful, saying “we do not believe in doing any riots or destroying property.”

She asks people who want to attend to wear masks and practice social distancing. The protest is open to “everyone of all backgrounds,” according to the flier.

Smith estimates the protest will last about two hours.

Around 10 people showed up to the previous protest, which featured handmade signs emphasizing Black Lives Matter. Many cars honked in solidarity.

“We just want to be heard,” Smith said about the protests, adding that Floyd is from North Carolina. He was born in Fayetteville. A memorial service for Floyd will be held Saturday in Raeford, where his sister Bridgett Floyd lives.

Smith encourages people who want to attend to speak up not just for Floyd, but “for everybody that has been wrongly accused or killed by police brutality, racism, all of that.”

“It’s way bigger than just one person,” she said.