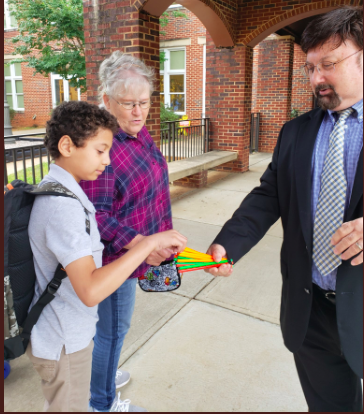 The upcoming school year will represent a changing of the guard for Stanly County Schools.

After two and a half years at the helm of the school system, Superintendent Dr. Jeff James will leave Tuesday to become the superintendent at Iredell-Statesville Schools.

“I’m not divorcing Stanly County by any means,” he said.

He said he loves the county very much and still considers it to be his second home.

The county has appreciated James.

“I’ve worked with several superintendents,” School Board Chairman Melvin Poole said, “and he’s probably as knowledgeable on education issues and how to make the system work as well as anyone I’ve come in contact with.”

While he is tying up all the loose ends with SCS, including helping in the search for his replacement and ensuring the system is on stable financial footing, he is also meeting with outgoing ISS Superintendent Brady Johnson, who has been a mentor to James, and school board members to ensure a smooth transition.

“I’ve been burning the candle on both ends,” he said about meeting with both school systems.

James first arrived at Stanly County Schools in February 2018. He had previously served several years as assistant superintendent with Montgomery County Schools. Before that, he had held numerous positions within ISS.

Upon his arrival, he went on a listening tour to hear from the community about how they viewed the school system. He said he soon learned that the perception was that SCS was failing.

James went to work to improve the system, something he is familiar with. As principal at Troutman Middle School, which was one of the state’s lowest performing schools before he arrived, he helped to transform the school. After a few years, it had highest composite growth of all middle schools in the Iredell system. During his tenure, Troutman was recognized by the N.C. Department of Public Instruction as one of the Top 25 Most Improved Schools.

James also worked to close the opportunity gaps for minority students during his tenure with Montgomery County Schools.

“My passion has always been helping the least fortunate,” he said, noting that he works well with at-risk students.  He and his wife Tammy have also mentored young kids at their church.

“Poverty is the enemy of education,” he said, “and in my viewpoint, the goal of a true educator…is to do my best to ensure the most impoverished citizens…have an opportunity at an education so they can become employable and pull themselves out of poverty.”

During his time with SCS, the academics have greatly improved. In 2017-2018, for instance, only 50 percent of schools met or exceeded growth and six schools were deemed to be D-grade schools. The following year, though, the number improved to 81 percent of schools and only one school was a D-grade school. Ten schools exceeded growth in 2018-2019 compared to only three the year before.

James is especially proud that teacher turnover at the Albemarle schools, especially Central Elementary and East Albemarle Elementary, has decreased during his tenure. Thanks to paying core teachers in grades 3 through 5 a stipend through federal money, “we’ve had the least amount of turnover we’ve ever had at those schools.” The schools, which have high percentages of students on reduced or free lunch, have also met or exceeded growth during his time, which he said was “phenomenal.”

James has also worked to deliver millions of dollars to the to the school system. In under two years, he said SCS brought in $14 million in an assortment of grants. The system has also applied for other grants that could result in several millions more for the school system in the near future. Before his arrival, James said the school system was a “grant desert.”

The school system has also spent roughly $1.2 million towards improving safety at each of the schools in the county, thanks to the quarter-cent sales tax that was approved during the November 2018 election. James said that in less than a year, SCS will be 90 percent complete with projects benefiting the district.

The school system has already added security cameras, installed LobbyGuard, a visitor identification system, in every school’s main office, and implemented the Here Comes the Bus safety app at every school. Fencing has been erected around certain schools while others have replaced damaged playground equipment. Security vestibules are also being built for added security, though not every school has one yet.

Whether it was his implementation of staggered school times, or his thoughts on consolidation, James said one thing he has learned in his time as superintendent is that he cannot please everyone and that his focus should always be towards doing what’s right for the students.

“In this role what you have to learn is…to do what’s best for students at the end of the day and sometimes adults don’t always like that,” he said.

When discussing staggered school times, which SCS established last August, he said the school system, due to a lack of bus drivers, simply had no other alternative. Had the school year started without implementing the staggered times, James said there would have been around 1,000 students a day that would not have had transportation.

The job has also emphasized that it takes a collaborative effort with numerous community partners to make sure the school system is successful.

“You need to take in all viewpoints and work with all members of the community,” James said.

But part of his job, he noted, has also been empowering his teachers and staff to grow beyond the levels they necessarily thought possible.

“Dr. James has a wonderful ability to guide people around him in directions they may not have been able to see within themselves,” Hope Miller-Drye, administrative and board assistant, wrote in an email. “Being very data-driven, he sees past personal boundaries and looks for opportunities for individuals to grow and expand.”

Though he doesn’t have many regrets during his tenure, he wished he had found a purpose for Ridgecrest Elementary School. There were discussions earlier in the year about possibly looking into reopening the school, but James said the coronavirus pandemic halted the momentum. He also stressed that the high schools need to be renovated, referring to them as “grossly out of date.” He said the state of a county’s schools impact the county’s ability to attract new industries.

James also would have liked to have forged a stronger relationship with Stanly County commissioners to address future growth in the county.

“It takes four to five years to plan growth and they need to be involved,” he said.

An eye towards the future

With James moving to ISS, he looks forward to spending more time with his wife Tammy and daughter Crystal, who live in Iredell. He will also help to oversee the construction of a new high school and two new middle schools.

He still plans to visit Stanly and check in on teachers and staff. James said he would like to work with the new superintendent on applying for joint grants between Stanly, Montgomery and Iredell to try and go after large sums of money.

James said the students at SCS are “second to none,” and that his conversations with them have been the best part of the job.

“He’s got a heart for kids and people and it’s served him well,” Poole said. “Sometimes you don’t realize what you’ve got until the person is gone and I think this is going to be one of those cases where we don’t realize what we really had until he’s gone.”