Fish for Free in NC’s public waters on July… 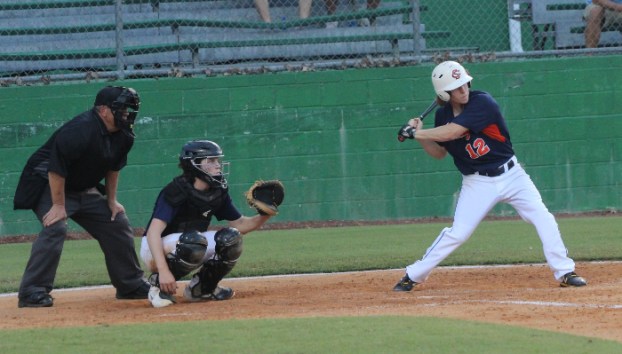 Cody Kidd takes aim at a fastball and delivers his second home run of the game in Wednesday's 19-4 rout of Mount Airy. (Photo by Charles Curcio/staff)

With the cancellation of the American Legion baseball season, the N.C. 3 League formed and welcomed teams from outside the Area III confines.

One of those teams, Mount Airy made the long trip to The Ball Park at West Stanly where one former Colt had a big night.

Cody Kidd, who pitched for the Pfeiffer Falcons last year, had four hits, including two homers, driving in five runs in a 19-4 win in six innings Wednesday night.

The game ended early when Mount Airy chose not to continue due to having to preserve pitchers for games later in the week.

For Stanly (1-1) it was the team’s first win of the season and was the host’s first league win.

“It’s definitely good to be back here, especially at West Stanly,” Kidd said about playing on West’s home field.

Kidd, who is mainly a pitcher at Pfeiffer and does not get to hit, said he got into the cage this week after striking out three times in Monday’s loss to Greensboro.

“I spent about an hour and a half in the cage just hitting off the tee by myself,” Kidd said. “I felt like I figured some things out.”

The Pfeiffer freshman said he knows how the ball plays on the field.

“I love being out here.”

Kidd got Stanly’s offense going in the bottom of the first with a two-run home run and later added a solo shot, going back-to-back with Connor Tucker as part of a six-run fourth inning.

Stanly’s offense continued to light up the scoreboard, crossing home plate eight times in the bottom of the fifth.

“I think we have a lot of potential, especially the way we swung the bats (tonight),” Kidd said.

“It took him a few at-bats and I finally think he got his confidence back,” Stanly head coach Jordan Sells said. “He can still swing the bat.”

After Kidd’s opening blast, Sells said the team was all hands on deck at the plate.

They “were able to relax and have good at-bats the rest of the game,” he said.

“It’s going to take some time to get everybody some reps. We’ll figure it out as we go.”