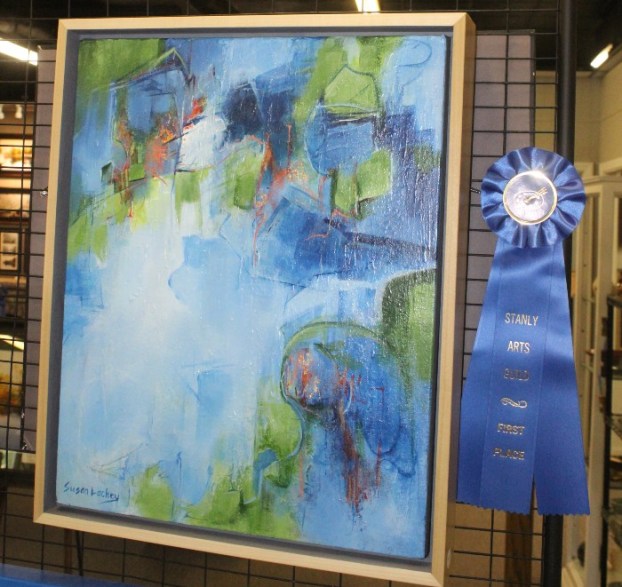 Another sweltering hot summer in Stanly County brought art enthusiasts an explosion of local art to a local show.

Hosted by the guild for the last 15 to 20 years, the show offered a number of entries lining the gallery at 330-C N. Second St. in downtown Albemarle.

Anita Ammerman, Guild member and contributor to many of the Guild’s shows, said the time on the calendar annually has always been right to have the Summer Art Explosion.

“It’s just a good time when the artists don’t have anything to do and they’re looking around for something to inspire them,” Ammerman said.

In categories of 2D and 3D media, first-, second- and third-place awards were issued, along with a number of honorable mentions.

First place in the 2D art category went to Susan Lackey for her mixed media piece, “Conversations,” an abstract of three diverse people having a conversation.

Lackey said her work is totally non-objective and starts with a concept.

“The concept in this case has to do with the idea of talking of diversity. I wanted to have some figures who are very different from each other and they could be coming together in a group to discuss something,” Lackey said.

She said she wanted to create some texture on the painting with some undertreatment but still be “smooth and easy for these three people together.”

Dominated by shades of blue, green and white, the painting has some red and orange spots come through it with some gold leaf underneath.

“I kind of had a feel for where I wanted the figures to be,” she said.

Second place in the 2D competition went to Lee Haywood for his photograph, “A Swing on the Yo Yo,” while third place was “Indian Women” by Stanley Matheny.

On the 3D side, a pendant created by Nancy Lipe took first place. A guild member since 2007, Lipe said her intention with the pendant was to create movement in the piece.

“It’s hard to do when you’re working with flat glass in general,” Lipe said.

Cutting out a piece of some dichroic glass, she said she tried three different techniques with three kinds of glass before finding the piece she said had the “waterfall effect” for which she was looking.

Second place went to Judith Williams for “Waterbird” and third to “When Corona Crashed the Wedding” by Lorrie Hatley.