Richfield commissioners would appoint someone to fill Almond’s seat… 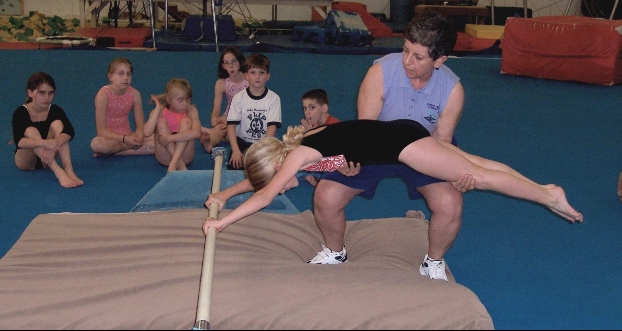 Austin made an impact on youth through gymnastics

A prominent person in gymnastics from Stanly County left a strong legacy both in the business she started and the students she coached.

Dianne Austin, who died Aug. 26, founded Stanly County Gymnastics and coached for 40 years before retiring in 2014. On the gym’s website, she previously posted about her time with SCG, saying “what a fun ride it was.”

All In the Family

Mimi Austin Braunsberg, one of Austin’s daughters, said she felt like a gym rat and lived at the gym with her mother as well, also quickly following in her footsteps by coaching the sport from 1998 until her mother’s retirement.

“During that time, she taught me more life lessons than I ever even realized,” Braunsberg said. “She was a bulldog when she needed to be but would help someone in need without blinking an eye. She helped so many people through the sport of gymnastics and I’m so grateful I had the opportunity to share her love of gymnastics.”

Mary Jo Austin Lizotte, another daughter of Dianne’s, was coached by her mother. She went on to be a Level 10 gymnast and received a full scholarship to UNC-Chapel Hill.

“She was the best coach I ever had. I don’t know of anyone else in his area who received a full gymnastics scholarship to a D-I university. Mom coached me to that level,” Lizotte said.

Lizette said her mother administered her training including recruiting coaches from all over the country along with Puerto Rico and Russia to help.

“They all coached me for a season, but none better than Mom. She was the best coach I had in my 18-year career,” Lizotte said.

From Student to Coach to Owner

Having coached three generations of young girls and boys, Austin gave the reins over to the current owner and director, Holly Pennell, upon retiring.

“I take great comfort in Holly knowing that she will continue the traditions of SCG plus adding her own wonderful style,” Austin posted on her website.

Pennell talked about the history of the group, saying Austin first started teaching classes at the YMCA with a couple of students before moving first into a building on Pee Dee Avenue which is now Albemarle Glass.

“She was my first coach,” Pennell said about learning under Austin after taking a field trip to SCG with her kindergarten class when she was 6. “I never knew anything about gymnastics until that field trip and immediately fell in love with it. I thought it was super fun.”

As a coach, Pennell said Austin had a “beaming smile,” adding she was “super positive.”

Pennell said she modeled her coaching style after Austin.

“She was very strict and you knew what she expected, and that kind of goes along with the sport,” Pennell said.

“You have to be strict as a gymnastics coach, but you also have to be kind at the same time,” Pennell said, noting coaches have to be tough and take a disciplined approach but have to have kind words due to the risk of injury in the sport.

Learning gymnastics teaches self-discipline and creates goal-oriented individuals, she said, which is how gymnastics “builds the character of a child.”

Gymnasts also have to have attention to detail because of the nature of the sport, which is a lesson for life into adulthood.

“I can only imagine how much hard work and passion it took build it from the ground up,” Pennell said.

Austin was a mentor and role model for many young people, Pennell said.

“I think that is how all good coaches should be: someone to look up to, someone to kind of (make one) say, ‘Hey, I want to be like this person,’ ” Pennell said.

Many gymnasts spend more time with coaches than their own families, she added, saying many times she will joke with her students she is their gym mom so they have to listen.

As is the case among many coaching trees, Austin’s students often became gymnastic coaches.

Madalynn Raynor started learning gymnastics from Austin when she was 4.

She said she was a tough coach.

“She knew how to get under your skin enough to where she would push you,” Raynor said.

Being a teacher as well helped Austin be a coach, Raynor added.

Now at 21 and in school at UNC-Wilmington, Raynor is a double major in exercise science and Spanish. She is also teaching gymnastics at a gym there.

Like many gymnasts who stay on to coach in the sport, Raynor said she loved the sport from the beginning.

“It was literally the best part of my life, with the friendships that came out of it. I was in the gym 20 hours a week starting at 5, so I was in the gym more than I was at home,” Raynor said.

Gymnastics is a sport, she added, which takes “dedication, focus and repetition.”

“You have to be committed or you’re not going to get where you want to be.”

Austin maintained discipline in the gym and pushed students to excel, which is something Raynor said she continues to do in life.

“Everybody has challenges and a lot of people around me don’t have the same push to get through those challenges,” Raynor said.

Her coaching style is modeled after Austin, with more emphasis on the old-school way of doing gymnastics. Austin coached students by allowing them to build up their self-confidence and mental toughness by doing stunts on their own without spotters. Each move had multiple progressions she would implement.

“It was on you and your strength, your confidence,” Raynor said. “She was like, ‘Whenever you’re ready, that’s when you can do it.’ ”

Austin was tough but she also had a nice side, she added.

“We had a joke in the gym. Whenever she was coaching, if she would come in and she was in a good mood, we were like, ‘Oh, she had her Happy Meal today.’ If she didn’t, we said ‘We need to go get her a Happy Meal.’ ”

Raynor said one of the most special moments of her life was at a FanFest (the gym’s annual public show) when Austin told her she was proud of her and it had been a privilege to watch her develop into the person she became.

One of Austin’s former students used the skills and athleticism of gymnastics to excel in volleyball.

The appeal early for her was watching gymnastics on TV, saying she “wanted to be one of the older girls and be able to do everything they could do.”

Lowder said Austin was a perfectionist because “she would always want us to be the best we could be, have the best form and come to every practice with a smile on your face.”

Physical skills you learn in gymnastics go from your fingertips to your toes, saying basically “your whole body has to be perfect and that’s what Dianne wanted us to be: the best we could be.”

Pennell and SCG continue to coach the sport, host parties and make a difference in the lives of young children and look to do so in the future.

A memorial fund has been established to allow more children to participate in gymnastics on the website gofundme.com. The family asked on Dianne’s passing for people to give to the fund rather than send flowers. The link to the fund is http://www.gofundme.com/f/dianne-austin-gymnastics-for-all-memorial-fund.