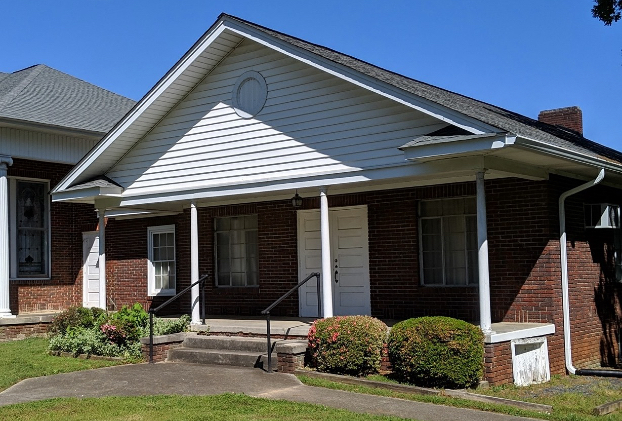 The Community Table in Richfield will be located inside Richfield United Methodist Church.

Stanly Community Christian Ministry has been working over the last several months towards establishing a Community Table location in Richfield.

While the plans are still fluid, the proposed site of SCCM’s food program in the town would be inside Richfield United Methodist Church.

While the church over the past few months has been undergoing renovations with its basement in order to give IMPACT, a local Christian youth group, a better home for its activities, it has also been working to renovate the kitchen and bathroom on the ground floor for the soup kitchen.

During the town’s board meeting in August, Jenny Clore, development director with SCCM, and Rev. Kris Mares, missional engagement associate with the Uwharrie District of the WNCC, first spoke with commissioners about creating a Community Table in Richfield.

Creating the feeding site inside the church is still contingent upon the Richfield Board of Commissioners approving a building permit for the kitchen renovations. The permit has not yet been approved as the town is seeking advice from its attorney about whether the church should be rezoned from R-20 (single-family residential) to neighborhood business, since the church would be repurposed into a community feeding site.

The establishment of the soup kitchen will be a partnership between SCCM and Crossroads Connection, a community-based organization comprised of Richfield UMC and other churches from northern Stanly County. The network of churches work to meet the community’s needs in four areas: education, food, healthy living and relationships, Mares said.

SCCM already has Community Table locations in Albemarle and Norwood, which serves daily meals free to the public from around 11 a.m. to 12:30 p.m. According to information from SCCM, almost $100,000 is invested back into the community from both locations.

SCCM has secured grants to establish the soup kitchen, including $14,000 for kitchen renovations, $2,000 for bathroom renovations and $1,600 for a handicapped accessible ramp from the Duke Endowment and $8,000 for architectural planning work from the Uwharrie District, according to a brochure about the new location. Another $30,000 will come from SCCM for salaries, food and supplies, while $20,000 will come from the SCCM Appliance Grant to outfit the kitchen with the necessary tools.

The Richfield Community Table, which is tentatively scheduled to open in January, would be open to people three to five days a week, depending on how many volunteers would be available to work, said SCCM Executive Director Heather Kilde. When the location opens could also be impacted by the coronavirus pandemic, if it continues to remain a serious threat.

The soup kitchen would have a dining hall similar to the other locations and SCCM is planning on hiring a manager to run the operations, Clore said.

The vision for the Community Table in Richfield, according to a brochure about the new location, is a place “where people in need can come, receive a nutritious meal, fellowship with new friends, engage in conversation and go away with a full belly, a smile on their face, and a heart that has been strangely warmed.”