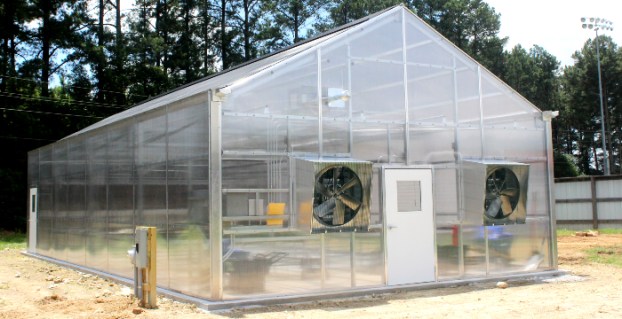 The new greenhouse at South Stanly is up and at work in the fall semester. (Photo by Charles Curcio;/staff)

Stanly County Schools (SCS) has continued to expand its vocational choices for students, which includes a new program which started this semester at South Stanly High School.

Casey Lemons, a North Stanly graduate who finished at the top of her class at N.C. State, is the new teacher of the program at South. She earned a degree in Agricultural Education with minors in Animal Science and Agricultural Business.

Lemons teaches animal science and horticulture while also possibly having classes regarding agriculture applications like welding or working on small engines.

She credited Moody Blake at North for having taught her well in high school. She also grew up on a horse farm.

“I had a lot of experience with horses. In high school, I worked on a beef cattle farm, Thurman Burleson and Sons Farm, and so I learned a lot there,” Lemons said.

The teacher said she fell in love with agriculture and everything around it, including FFA.

Her initial plans were to become a veterinarian, but said her love of FFA and agriculture “would be great in a classroom. I love educating people and letting them know about agriculture and all the good things that go along with it.”

Lemons said South has a lot of agriculture in the area, along with businesses willing to help support the new program.

Mandy Mills, director of Career & Technical Education, said plans for a new program were in place to put a new agricultural program at the school when Lemons started working for SCS.

Mills said the new program, and all career and technical education programs, “prepare students to go into the workforce whether that’s directly after high school or with more training.”

“We’re really lucky to have her,” Mills said of Lemons.

The new greenhouse came in part, Mills said, along with a partnership with Norwood’s Juneberry Ridge, formerly Lucky Clays Farms, who helped set up the aquaponics and made several donations. Overall, the project cost around $100,000.

Aquaponics, which uses fish to help fertilize plants, will make South’s program unique as no other agricultural program in the county raises plants in this manner.

“We’re excited about that partnership … that will give us something unique to South Stanly and Stanly County because there are not a whole lot of programs in the state that have aquaponics,” Mills said.

Fish like tilapia are grown in a side building while plants are grown using hydroponics, which is without soil. Secretions from the fish mix in with purified water and are used to grow plants.

The current situation with the pandemic has not allowed the aquaponics to start, but Lemons said two students are interested and have been doing preliminary research work on the project.

Lemons said it has been crazy for the first couple of months of the program with the pandemic, but she has enjoyed getting to know them.

Establishing the school’s Future Farmers of America (FFA) club has been difficult because the club can’t have any activities, but Lemons said the school has a charter for the club and has students interested in joining.

She said the school is also forming an alumni group for those in the community who were previously in FFA clubs who would like to help support the new group at South Stanly.

In the first couple of months, Lemons said her horticulture students have been doing transplanting and propagating of plants, having filled up six benches with 30 varieties of plants.

The process was a little slower for growing plants having students every three weeks, Lemons said, meaning certain work was divided up differently. Materials and tools get wiped down after each student uses them, Lemons said, and social distancing has not been as difficult with the size of the tables in the greenhouse.

“We have been blessed with that awesome greenhouse. We’ve been able to do a lot,” Lemons said.

She added creating a new program in the current school plan has been a little more difficult, keeping kids involved virtually, but added, “we’re making it. We’re getting there.”

The animal science class has been a little more difficult, she said, trying to teach it without having real animals. Lemons took the challenge and has found alternative ways to teach the class, including one project where students had to research a certain cut of meat by researching the steps involved and eventually make a model of the cut out of Play-Doh.

Interest in the new program has been strong enough, Mills said, to have more than one teacher. She added programs like FFA teach students lessons beyond agriculture, like learning to speak in public and problem solving.

“Most people think (FFA) is all about cows, plows and tractors…but they have all kinds of different events,” Lemons said, including career development such as learning job interview skills.