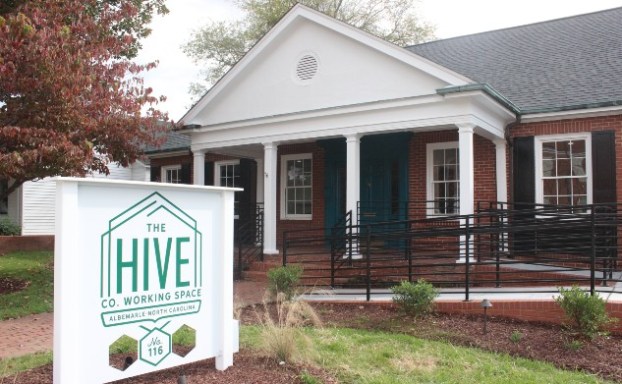 The Hive at 116 will be opening in downtown Albemarle as a co-working space for professionals Nov. 1. (Photo by Charles Curcio/staff)

A new business space in Albemarle looks to provide start-up companies, grad students and anyone else needing meeting space a secure working environment in a building used for years by an organization dedicated to growing business.

Located in the old office space of the Stanly County Chamber of Commerce, the Hive at 116 provides Class A office space, something realtor and owner Lee Allen said is in short supply in Stanly.

Class A office space is characterized by being high quality inside and out, properties which are centrally located in towns with professional management.

Allen said the inspiration for renovating into Class A came from his children, Meredith and Jackson, finding out they often study more at coffee shops than the library.

The Hive will have several levels of membership, from monthly fees for college students, with all the coffee they can drink in the revamped kitchen area, to part-time rentals and full-time businesses.

Start-up businesses, Allen said, “should not have to pay $800 to $1,000 a month for office space, because (they) are trying to get started.”

The new office space comes with a receptionist more like a concierge, Allen explained. Entrepreneurs looking to host virtual or in-person workshops, business meetings and interviews will have access to professionally designed spaces with new furniture, an 80-inch television screen and more.

A space behind the building with lights going up can host outdoor events, eventually even wedding receptions. Allen said plans are underway to host events like Thirsty Thursdays and Food Truck Fridays to promote the space.

People working from home, Allen said, can also rent space in The Hive and use the space safely, with high-speed internet access included. Security cameras and coded entry into the building will provide safety for the building’s occupants.

Allen has had a new air conditioning system with an added filtration system “like they have in surgical operating rooms,” he said, along with cosmetic touches such as art.

“I’m going to make something that doesn’t exist,” Allen said, recalling the mentality of a creator like Steve Jobs. “Something that you don’t even know you need.”

Allen said the building needed a lot of work.

“At the end of the day, I got tired of being sick and tired of everybody blaming somebody else for not having Class A office space in downtown Albemarle.”

Stylistically, the building harkens back to the 1970s in terms of decoration, style and colors, Allen said, adding he and his staff repurposed and reused the original metal cabinets.

Having the new Pfeiffer University Health Sciences Buildings in Albemarle will mean the city is about to “have 200 students here who are going to want a space other than their home to study,” for whom the Hive can provide a study place.

The Hive will also be a place for networking of professionals and “young, budding entrepreneurs,” Allen said, calling the building “an incubator for business.”

Because of the security measures in place, the Hive will be open 24 hours a day for its occupants.

The Hive is scheduled to open Sunday.