DG MARTIN COLUMN: Waking up as a Republican 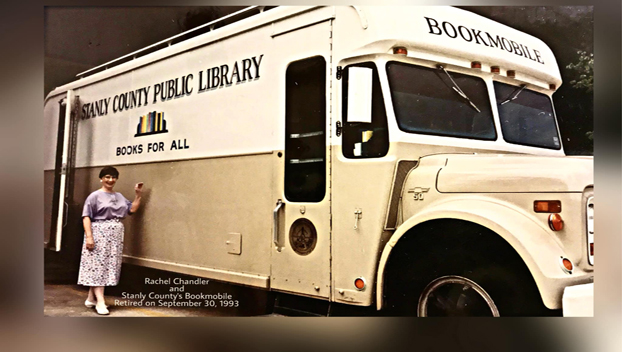 Rachel Chandler and the Stanly County Bookmobile program retired in 1993.

PEEKING INTO THE PAST – The Bookmobile Lady

I’ve shared in a previous article that the first bookmobile in use in Stanly County was provided by the state during the late 1930s.

The county raised money during 1941 for its own vehicle, but due to the war was not able to purchase one until June 1947. Over the years that followed, bookmobiles traveled around the county transporting books between the branches and stopping at underserved areas of the county.

In 1970, Rachel Chandler became one of the two bookmobile drivers. Each morning they would load boxes of books, many included bags of books with special requests. They kept the bookmobile on the road four days a week from 8:30 a.m. to 5 p.m. or later.

They would visit all corners of the county and for many people, a visit by the bookmobile was a special occasion. People of all ages looked forward to
seeing Ms. Chandler and she became known as the “bookmobile lady.”

When she retired in 1993, after 23 years on the road, the county retired the last bookmobile as well.

Monarch will have Wellness Drop-In 2021

Student inducted into The Honor Society of Phi Kappa Phi

North Stanly football will not play in postseason

Competitors ‘Back The Blue’ at recent rodeo

SNAP BACK IN TIME – April 1981 – Stanly Tech racks up honors