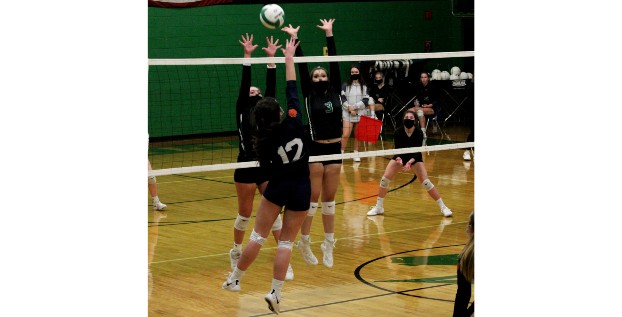 With the uncertainty of the season’s continuation, West Stanly took an active approach to honor the team’s three seniors on its volleyball squad.

Instead of waiting for the final regular-season home game, as is tradition, the Colts hosted Anson County and had Senior Night festivities.

Before Tuesday’s home match against Anson, West Stanly’s three seniors, Addie Barbee, Riley Barbee and Madison Kee, got to enjoy such a moment before the game.

Kee said she appreciated moving up Senior Night so she and her fellow seniors would be able to have the ceremony, adding “the girls were great” and the experience was better than “anything I could have ever dreamed up.”

Along with her teammates, Kee said she was glad to be playing. She said preparations leading up to the season have been emotional, not knowing if they were going to get to play or not, and if anyone would be there to watch the games.

Riley Barbee said she was grateful to be able to get “one last game in” after having only played one game last year, missing the majority of the season with a knee injury. She went through therapy to be able to play this year.

The impetus to play each game as if it is her last has been motivation all season, she said.

“I’m not going to play anymore after the season so it’s all or nothing right now.”

Addie Barbee, who plays setter, said she saw last season the sadness expressed by one of her friends who did not get to have a senior night for her sport.

She said knowing this is her final season playing volleyball for West was sad, but celebrating on the court with her teammates before a game was special.

For herself and her fellow seniors, Addie said playing every game like it’s their last means they have to maintain a positive attitude. They do that, she added, by looking at the bright side of being able to play any games at all because they were worried about having a chance to play.

In the match, the Colts dominated from the beginning, leading by double-digits early in all three sets. Kayli Cleaver led West with nine kills while Kee and Riley Barbee added eight kills each. Addie Barbee had 15 assists and nine aces, and Riley added 12 assists.