Stanly resident named a finalist in Dream on 3… 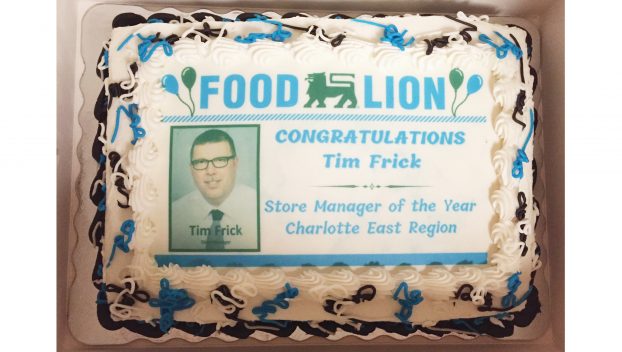 A decorative cake with his picture on it was given to Oakboro Food Lion manager Tim Frick in honor of his recent award. (Contributed)

The police chief for Oakboro recently made a house call to one local hometown hero and honored him by helping lead a mini parade past his house.

Tim Frick, manager of the Oakboro Food Lion grocery store, was recently honored by his employees and chief T.J. Smith after he was named the company’s Charlotte East Region store manager of the year.

The parade came by his house in Oakboro with associates hanging out the windows of cars with signs praising Frick.

“It was really cool and it made me feel really good under the circumstances. For all of them and T.J. to come by, and members of the community, it meant a lot,” Frick said.

He could not come out and greet anyone because his family was in quarantine after a family member tested positive for COVID on a recent stay-at-home vacation.

Sabrina Elliott, the Charlotte East Region manager, recently informed Frick of the award and described him as a “pillar of the community.”

“He believes in his community and as a result he supports it, whether in his personal life or his work at Food Lion,” Elliott said.

Even before the pandemic hit last March, Elliott said the Oakboro store manager hit the ground running in terms of helping his community. She noted Frick had already raised a donation for the food pantry at Oakboro STEM school.

Beyond just food drives, though, Elliott noted Frick and his staff honored local high school and college graduates with a Wall of Fame in the vestibule of the store.

Serving the community, Elliott said, shows Food Lion is “not just about the customers coming in and purchasing their groceries from us…it’s being a part of the community and showing up every day to help the community we serve.”

Frick “epitomizes what a leader should be, not just a store manager…but a leader that embraces the principles of servant leadership,” Elliott said.

Willing to do any task in the store, Elliott said when Food Lion added a wing bar Frick wanted to learn all about how the wings were prepared.

“He wanted (staff) to know a task as simple as preparing wings at the same level as his associates. He didn’t have to do that,” Elliott said.

Talking about his working relationship with Frick, the Oakboro chief said the manager and his staff have always been there when he had a situation where a member of the community was in need.

“I’ll go up there and he will figure out a way to get me what I need,” Smith said.

Frick said his job is about relationships like his with the police chief, with associates and with community members.

“TJ and his guys take such good care of us. They are out there every morning when we come into open the store, and there is always someone in the parking lot when we leave and close the store at night,” Frick said.

“(Customers) are like my second family…I see them as much as I see my own family. Over the years, you build relationships with individuals and people in the community.”

Helping the community, Frick added, is one of the big tenets of Food Lion.

“We are the towns and cities we serve. That’s the way we look at it; we serve our communities the best we can.”