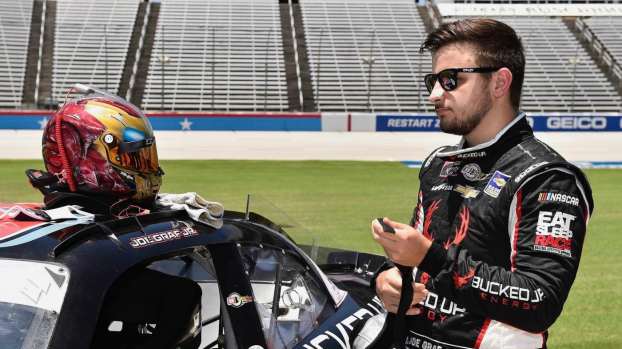 The conclusion of the National Football League season comes after the annual Super Bowl in early February, but for one player, this offseason does not mean inactivity.

Antonio Williams, the former North Stanly standout who plays professionally with the Buffalo Bills, has expanded his professional interests by creating a partnership and investing in NASCAR Xfinity Series driver Joe Graf Jr.

Graf drives the No. 07 Chevrolet Camaro for SS-Green Light Racing, a race team based in Mooresville, in the Xfinity Series.

For Williams, partnering with a NASCAR team was a way of honoring his grandfather, James Williams, a big racing fan. His grandpa’s favorite driver was Bill Elliott.

The opportunity to work with a team came when Williams posted on Twitter asking if anyone had any NASCAR connections. He received “a crazy amount of responses,” he said, from teams like Richard Childress Racing, Petty Motorsports and more.

One of Graf’s directors of business, who lived in Rochester, New York, contacted Williams, which is how the partnership came about. It turned out Williams and Graf had a connection beyond the realm of sports as both shared the same sports psychologist, Dr. Desiree Festa, which “brought everything full circle.”

Graf said Festa spoke highly of Williams “and I absolutely see why I had to get to know him. He is not only a tremendous athlete, but a tremendous business mind as well.”

Graf said Williams “is not only driven to be the best on the field, but he is absolutely killing it off the field as well.”

In terms of their respective pro careers, Williams said he and Graf are similar, with both coming off their rookie seasons and looking to improve next year.

“With the right sponsors and the right partners in NASCAR, (Graf) can be great, and that is very similar to myself,” Williams said.

His role with the team will primarily be on the business side, he said, using his leverage from being a NFL player to gain big-name sponsors for the team.

Graf said Williams has brought a lot of sponsorship opportunities to the No. 09 team. Williams, he said, “is just a pleasure to be around. He uplifts the whole team…he has an uncanny ability to speak things into existence.”

The driver said Williams has helped to invigorate the culture of the team as team members become friends with him.

“He uplifts and motivates everybody he is around.”

As a member of the Bills, Williams said he has felt the support of the team’s fan base.

“The way they back anybody that’s a part of the team that represents the team in the right way is amazing. Even if you end up on another team, the Bills back you…I’m really blessed to be a part of it.”

Being part of the Bills was in part how he connected with the Graf team and Festa, who started working with some of Williams’ teammates.

Both being younger athletes, Graf said, gives the two many similarities, adding it was crazy how well the two get along despite only knowing each other a few months.

The driver also joked about he and Williams having one belief in common: not being able to stand the weather in the Northeast. Graf was born in New Jersey, which makes him familiar with the tough winters in the Northeast, while Williams plays football for a franchise which often sports some of the toughest wintry playing conditions in the NFL.

Williams’ investment in the sport is part of NASCAR’s overall efforts to have more diversification, which the Bills’ running back said is important “with the way the world is right now and with everything becoming more diverse.

“When you add a lot of variety, more people become interested.”

“NASCAR is doing a tremendous job of becoming much more inclusive and diverse,” Graf said. “It’s amazing the way the sport is going. In my opinion, it needed to do it much sooner, but I’m so happy it’s coming together now.”

Having planned to invest in the sport for a while, Williams said he wanted to start in the smaller Xfinity Series but eventually work his way up into the NASCAR Cup Series.

Just recently, Williams said he worked a deal for the team with Z Grills, a wood grill company based in San Francisco.

Working for the Graf team as the team’s director of business development is a natural fit for Williams because, as the Bills running back said, “people know me with hard work in football, but I’m also a guy who can talk. I’m a guy who can convince people and get things done.”

As one of six people with Stanly backgrounds working in the NFL, Williams said he wanted to do a project that no one else had ventured into. He also advises young people wanting to go into different projects to not be afraid.

“Don’t be afraid to go do something that somebody has never done. Get out there and chase a dream. If it’s your dream and nobody else’s, that’s OK. Chase it and attack it; take advantage of every opportunity,” Williams said.

Williams’ goal is to own a NASCAR team of his own, and he said patterning with Graf is the first step for him.