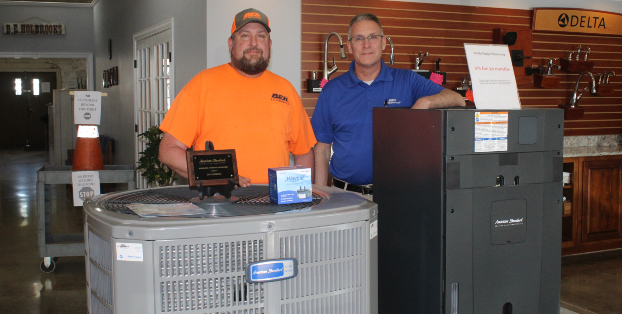 With temperatures warming up and the construction season getting busier, more homes and businesses need plumbing and HVAC work.

One company which has existed nearly 100 years continues to serve the public in those areas.

B.E. Holbrooks in Stanfield first started doing plumbing and HVAC (heating, ventilation and air conditioning) work in the 1960s. Current owners Brad and Brent Holbrooks are in charge of the company started by their grandfather, Bruner Edward Holbrooks, in the 1920s.

Along with his brother Carl and sisters Ramelle, Beatrice, Miriam, Ruth, Ramelle, known as “Monk,” and Mary, B.E.’s company has its foundation rooted in agriculture.

Holbrooks patented a lespedeza seed harvester, which was a bolted-on cutter bar for horse-drawn carriages and later for tractors.

B.E. Holbrooks, on West Stanly Street in Stanfield, in the early days was, and still is, many things. The business, at different points in history, was a country store, grocery store, a hardware store, toy store and a gas station for many years. The family also sold Whirlpool appliances for many years, starting in the 1950s.

The two businesses which continue to this day include the hardware store, which has a home and garden section, and the plumbing/HVAC business which employs 21.

Brad Holbrooks said the company works on jobs in nine counties, including having done jobs in Winston-Salem and Greensboro. A lot of work is mainly in Stanly, Union, Cabarrus and Mecklenburg counties.

Both brothers agreed on one reason for the company’s continued existence: customer service and customer loyalty. Brad said he wanted customers to know how much he appreciates their loyalty over the years.

“We’re not going to sell somebody more than what they need. When we work on a house, we treat it as if we were doing it for ourselves,” Brad said.

Brad said what they learned from their father, aunts and uncles was simple: treat people the way you want to be treated, value the customer and “give them their money’s worth at a competitive price.”

Saying their family paved the way for their success, Brad said B.E. Holbrooks continues to be a family business with the addition of his son, Byron.

The plumbing business, Brent said, has changed little in terms of water piping and drainage. Materials are different now, along with water-saving fixtures.

One area plumbing has changed is water heaters, he added. Work on new water heaters is more technical as well.

Heating and air conditioning have changed, Brad said, noting it is no longer just “cold air in a box.” From thermostats which can be controlled on smartphones, to air systems which email error codes in case of problems directly to the company, technology has advanced.

As the world became more digital, the company began moving away from the appliance business in the 2000s, Brad said.

Plumbing and HVAC has always been their “bread and butter,” according to Brad, adding staying with the time on appliance sales took a lot of effort.

“We had to let something go,” Brad said.

B.E. Holbrooks has done many large plumbing and HVAC jobs for commercial ventures, where often companies may not be looking for savings. Brent noted new technology is more expensive for homeowners.

Like other companies in the time of the pandemic, B.E. Holbrooks has had its challenges. The company was deemed essential because people staying home needed heat and air, but business slowed down because of COVID-19, Brad said.

The pandemic has increased costs of supplies, he added, for several reasons. Brent said the company has completed jobs from its own stock, but he can see future problems performing work because of supply issues.

COVID-19 did not shut down the hardware store, nor did it prevent B.E. Holbrooks from having a real person answer the phone, which Brad said was important to their customer service ideals.

Keeping highly qualified, skilled workers has also been a problem for the company. Brent noted finding workers with plumbing or HVAC experience has been a challenge.

Brent said he did not know what the future would be for trying to find skilled labor, noting recent searches for open positions. The company usually employs 25-28 people, but at 21 there are positions available.

“People can make a doggone good living as a good plumber or heating and air technician,” Brad said.

Brent noted a recent article he read saying the average age of working plumbers in the Charlotte region was 51.

Despite the troubles, Brad said he and everyone at B.E. Holbrooks will continue to keep doing business the way they have. He added they look forward to continuing to serve their customers “for many years to come.”