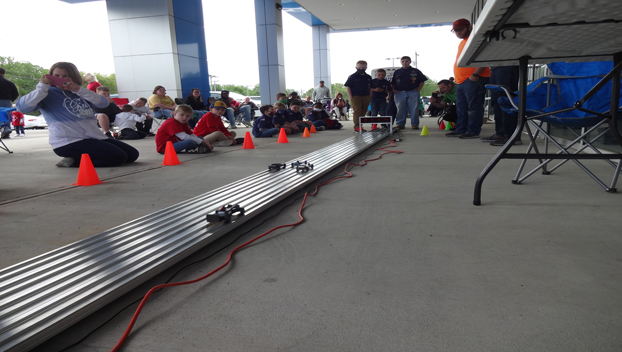 The Cub and Webelo Scouts of the Uwharrie District had their annual District Pinewood Derby on April 17 at Friendly Chevrolet in Albemarle.

The fastest car down the track was designed by Kingsley Russell, a Webelos Scout from Pack 111 in Star, with a time of 3.14125 seconds.

The second fastest car was designed by Daniel Coleman, a Bear Scout from Pack 202 in Locust, with a time of 3.14425 seconds.

The third fastest car belonged to Atticus Russell, a Tiger Scout, also from Pack 111, with a time of 3.17075 seconds.

Charlie Saunders, a Lion Scout from Pack 6 in Mt. Gilead, came in fourth with a time of 3.2595 seconds.

The difference between first and second place finishes was just .003 seconds. This is actually an average time as each Scout races their car on each of the four parallel tracks.

Awards were also given for Most Beautiful, Most Unique and Most Scout Spirit. The sales staff from Friendly Chevrolet helped judge these three categories.

Cub Scout Packs chartered through the Central NC Council welcome new Scouts to join the fun and adventure of Scouting. Cub Scouting is available throughout Stanly and Montgomery counties for youth from Kindergarten to fifth grade. Those interested in joining can attend a Skate Night for Cub Scouts at SK8 City on U.S. Highway 52 from 6-8 p.m. May 24 or look for a unit near them at BeAScout.org.