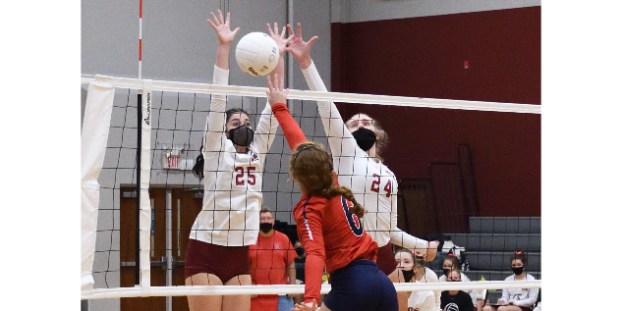 The battle between the 1A volleyball teams in the split 1A/2A Yadkin Valley Conference took a turn Wednesday night.

The Knights, tied for second place with the 2A Mount Pleasant Tigers, needed a win to move closer in the standings to the Cardinals.

It took four sets, but the Knights ended Union Academy’s 18-game win streak this season in a 3-1 victory.

Union Academy (18-1, 7-1 YVC) leads the Knights by a half-game in the standings. The Cardinals face South Stanly and Albemarle, but have to play at Mount Pleasant Oct. 12. The Tigers are ranked fourth in the 2A West rankings and tied with the Knights for second place in the YVC. This season, the Knights have split the series with the Cardinals and Tigers.

“Both teams are very talented, and not playing as one was frustrating because we didn’t maximize our potential,” head coach Rebecca Carter said about the previous conference losses.

The top 1A team in the conference receives an automatic bid into the postseason, while whomever finishes second would be a wild card team and play on the road.

“The biggest thing (for the Knights) this season is learning to play as a team. I can fight for my players and I will, but at the end of the day ultimately it’s how bad do they want it,” Carter said.

She added it is important for her team to realize volleyball is a mental game as well.

“When you walk in the gym, I want you to be prepared mentally. That means if you need to go listen to music by yourself, go. If you need to eat, go. Win or lose, you have to be mentally prepared for (the game).”

Gray Stone’s only other loss this season was a non-conference matchup with the team in first place in the Rocky River Conference, the West Stanly Colts.

The Knights have three matches left before the conference tournament opens Oct. 18. Higher seeds will host the first round, with the semifinals and finals at Mount Pleasant Oct. 19 and 20.

“We can go all the way, but we can not get cocky…there’s no reason we can’t go all the way if we play together as a team,” Carter said.